Rinse the poha in a strainer until it turns soft. You can check if it’s done by taking a flake and pressing it between your thumb and index finger. It should break easily.
This step makes sure the poha doesn’t turn mush when you add it to the pan.
I also add salt and turmeric into the strainer once the poha is soft, however you may add them directly to the pan too.
Add lots of peanuts as they give a nice texture to the poha.
After you add the rinsed poha to the pan, toss it and then take a flake and taste test it. If it tastes dry, sprinkle some water over the poha (just sprinkle, and add more as needed).
I usually have to sprinkle some water since the poha dries out a little in the strainer as you make the tempering in the pan.
After sprinkling water, I usually cover it for a minute or two on low heat.
Add little sugar to balance the flavors, just a little bit really helps in balancing the flavors of the poha. It’s optional though.
Finish with fresh cilantro and lemon juice, it adds so much flavor. I cannot have my poha without a good squeeze of lemon juice.
Garnish with sev! So just before you serve the poha, top it with sev and then dig right in. Oh it’s so good with sev on top! If you don’t have sev, other namkeens like aloo bhujia, chivda would also do. For those who don’t know what sev is, it is a kind of savory snack made with chickpea flour. It’s deep fried and usually enjoyed with chai. Adding Veggies to Poha My poha recipe only has onions and green peas but you may add more vegetables. I sometimes add potatoes, if you want to do that, dice them very small so that they cook quickly. Add them after the onions are done and cook them first before adding the poha to the pan. My mother-in-law adds carrots and cauliflower to her poha. Again, she chops them very fine. So the most important thing to remember here is chop the veggies very fine. Yon can then add whatever veggies you want to your poha.
Persons
2
Prep Time
10 minutes
Cook Time
10 minutes
Total Time
20 minutes 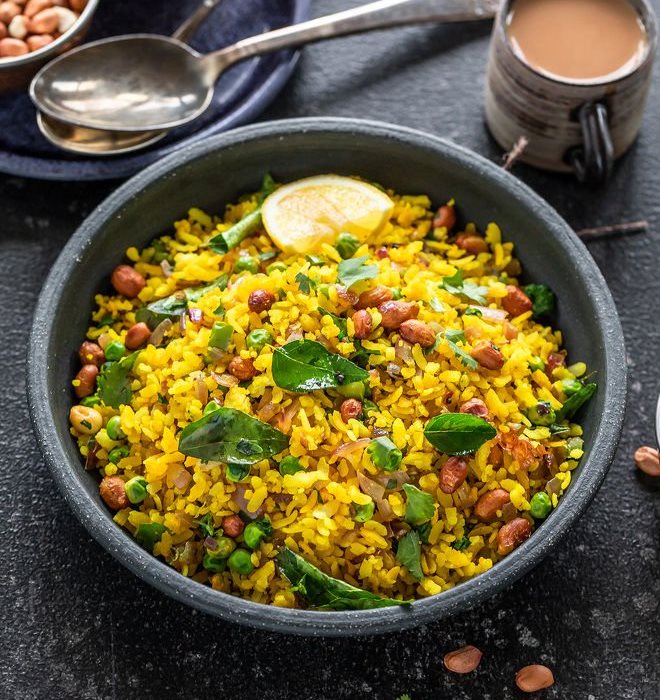